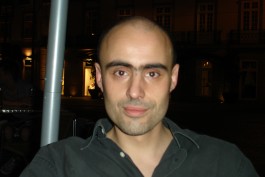 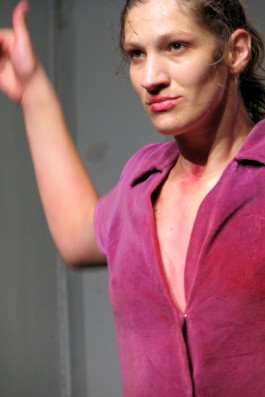 PARTE UM When I first approached theatre I did it with an almost mythical conception of the actor’s craft and vocation, hoping to unleash the latent potentialities and experiences that human beings have unused and unknown, in the depth of what is not demanded in the daily course of socialized life. I felt theatre as a systematic exploration of unrevealed darkness, the way to build immaterial dreams into becoming alive in the concreteness of solid flesh and voice. A place of utter excess and utter simplicity where life would appear with the physical roughness and subtlety brought by all that derives it´s meaning from a symbiotic relation with silence and with what is silenced.This conception serves now as an unreachable horizon that still guides and points the direction of the eye, and of the hand, and of the mouth. Later, the aspect of theatre as the conference of mankind reflecting mankind’s behaviours also stood as vital. The procession of behaviours hidden in the daily routines showing a very seducing beauty linked with the gradual fading away of all that lives, all that is not grandiloquent or huge, but as simple as the passing by of non returning moments.The web of theatre is weaved on the timely flow of our lives, is presented among that timely flow, and so, as all the performative arts, is the greatest paradox, the arts of the instant do not survive the instant, except in memories, dreams and means of experience deprived from the primal freshness of the current instant living communication between human beings.The fact that these approaches to the performative arts are still as valid as they once where is for me the most important fact in my autobiography and for the purpose of this autobiography now.To discover the ways of being moved by the seemingly ridiculous, the seemingly trivial, the seemingly unimportant, is one of the essences of the performative practice. Also, to find out the needs of Joy and the needs of Sadness, to find out the central points from where expression must arise and must be. So, the story table of what one has done, commonly known as biography, is not of my interest and is much more easily expressed in the standard curriculum.Autobiography means the description of one’s own life, made by the one who lives that life and can not be from that life separated. It is a counting and a choosing of which beads to place in the collar, referring to an examination of what has been. The interest of such a work, and perhaps most of all in the performative reality, resides solely in the ability to forget it in the effort of constantly tracing and understanding (under standing) the manifestations and flows of the immediate presence, that witch accounts for the living now recovered and regained.The spider that weaves the web is the same spider that eats the web that has been, literally, produced inside her belly. The labyrinth of Crete was said to have no ceiling, Ariadne´s (Arachne) thread was leaving it’s foot prints in a ground exposed to all weather changes, to know where to go those who carry the thread will find it better to keep focusing in the ground, crawling or walking, running or standing still, dancing or jumping, all at once and all apart.The Valentinian Gnostics spoke of entities called Syzygys, that stood for the union of complete oppositions creating a new reality that would never be known by the formalized description of it’s parts, or by the genealogical storytelling of their conception, in spite of the constant re-enacting of this conception in pleasant full physical terms by some rather literal and humorous Gnostic practitioners.A Syzygy is the sexual union between Daimons and Angels creating a new entity that is neither, and that overcomes either, and that is only experienced in living and becoming. Such are the performative arts, such is theatre, such are human beings, such is what is relevant in biography.The sabbatic tradition, as well as the tantrics, speaks of three states of consciousness, pointing to a fourth that breeds the fifth (the so called magical quintessence of the alchemists, or the Azoth), these states are waking, dreaming, and dreamless sleep. The fourth is the crossroads where they all become one in the present moment, opening the so called gates of eternal now, the mythical performance time, the place of going, of just going and just coming. Such is the theatre that breeds from the crossroads.

PARTE DOIS The NuIsIs ZoBoP group is dedicated to the sistematic exploration of the most hidden and non usual aspects of the performer´s vocation, through a mixture of extremely intense physical practices and extremely intense inner workings, these latter being mostly related to conscious dwelling in the dreaming process, focusing on the subtle point where neither sleep nor awakeness prevail.The socialized body is asked to stand aside and gradually vanish until the emergence of a non padronized reality is not a mere idle hope but a concrete act invading the ever unfolding present moment.The objective is to achieve real transformation, leaving aside the timely discussion on it´s effective possibility. The  schedule implies long hours of hard work, with very little discursive reflections in the middle. Additionally, performers are asked to undergo  processes that tend to infiltrate  their daily lives. Normality of desires, of commitment, of expectations, stops short any chances of progress. Normality, however, should not be confused with sanity.The work is drawn out of many sources, practically recreated in the workspace. No lineage or tradition is reclaimed but many are tested. The theatrical comes from the non theatrical, using the terms bluntly. Being it the web of human social and personal relations, as well as the age long practices that have their farthest shore in the touching of Otherness.The meaning of otherness is completely devoided, sweeping through you and leaving all certainties behind, travelling in silence. It signifies as much as the word Blackness does and, indeed, it has the same scent and the same fleshly impulses on their way up the spine, the feminine crawling of strangeness in the most archaic recesses of the body.In astonishment and terror and pleasure the first inner flame and heat are born. From those is transformation forged steadily and radically. At a point there is no way back and this should be known. Find your love conquering disgust and be as a dirty child searching for more dirtyness. Stretching out aloud the frontiers of sanity until all is sane make the witnesses reveal.NuIsIs is a term coined by Kenneth Grant that relates to the Thelemic Tradition, connecting the meanings and scope of two Egyptian female goddesses, Nuit and Isis. The Zobop are the spider sorcerers of Haitian voudun. Truth, here, is nothing but a tool for inspiration, a match to inflame after inner friction is achieved.The actual structure of the group is a three fold symbolism of Investigation, Creation and Pedagogy , each one linked with the others and hopefully deriving from the others in a sincretic way. The Investigation based projects are “Thanateros” and “Ex-Nihilo”.“Thanateros” , a name built from the union and logical inversion of the terms Eros and Thanatos, consists of psychophysical trainings of active descontextualization for performers, with an extremely high level of demand, aiming for the phisicalization of the bodies coming from otherness. “Ex-Nihilo” consists on strategies of free creation and systematic improvisation for performers , focusing severely on moment to moment discovery as a work strategy, an ideal approachable from a multiplicity of prismatic angles. Where “Thanateros” destroys, Ex-Nihilum creates.Both these works are usually not of an open nature, due to the intensity and intimacy required, access to them occurring mostly from direct invitation. In a sense, their fruitful development dwells in secrecy. 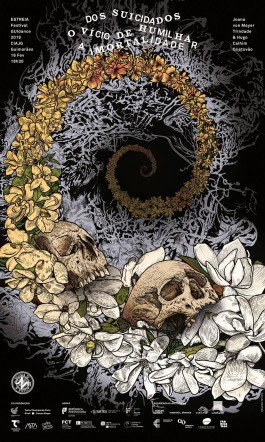 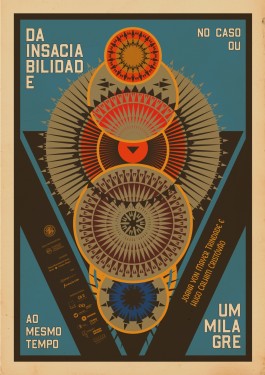 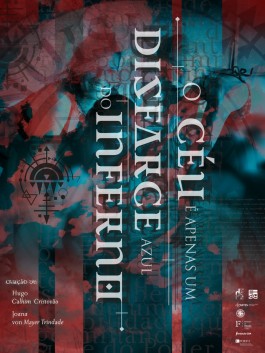